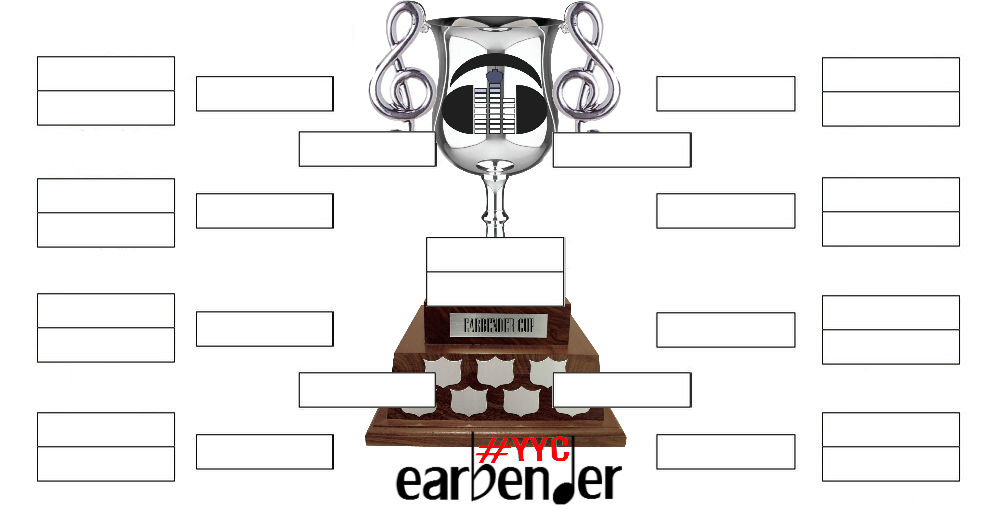 Yes, it’s closing in on playoff season for the hockey fans in the crowd, but here in Calgary, it looks like we won’t see the post-season. Never fear, there’s another playoff bracket that you can watch – and even better, you get to help determine the winners!

Introducing the Earbender Cup (not a real cup), a chance for Calgary bands to battle it out, hockey-playoff style, in a friendly online competition to see which performer reigns supreme. The sixteen competing bands/acts/performers will be seeded randomly, and each day throughout the NHL playoffs, readers will be asked to choose between two songs. Daily winners earn a “win” for their band, in a best-of-seven series. Winners go on to the next round, until finally, a winner is crowned.

This is purely for fun and bragging rights, and the first sixteen bands to sign up are in the playoffs. We’re hoping for a nice diverse selection of music: metal, folk, rock, orchestral, choir, reggae, country, rap, hip-hop, or anything else. Each participating band has to have at least seven songs or performances available on a shareable platform (self-hosted, YouTube, Bandcamp, etc) so that we can link to the song and let the fans decide their fate. Interested groups, please drop us a line with your name, contact information, Twitter handle, and the links to your songs. Our playoffs begin when the hockey playoffs start – April 30, 2013. Remember, strategy is key here – do you lead with your best four in the hopes of a sweep? Do you keep a sleeper in case of a Game Seven? We’ll give bands the option to change their lineups at the start of each round, subbing in new songs if they like, or shuffling the lineup.

To get in on the fun, check out our Twitter feed for the daily matchups, and follow the links to vote. If you want your “team” to win, be sure to share the links on your social media pages, and load your bandwagon with as many fans as possible! You can also play along with the Twitter hashtag #earbendercup.

1. Locomotive Ghost: Performing “folk-rock for nerds and lovers”, they are “a collection of musicians, poets, and artists who play guitar, piano, bass, ukulele, banjo, drums, and percussion”.

2. The Lost Lemons: This Calgary band, featuring Daniel San Martin, Chris Sipko, Joshua Marshall and Tim Drisdelle, has been on the scene for almost two years, and they play original reggae rock.

3. Septembryo: “Rock like Incubus. Dance like Daft Punk. Septembryo is an electronic burst of dreamy Alternative Rock fused with Electro-Pop. For music lovers who crave hard hitting rock and yet can’t resist a catchy hook. Septembryo is the guilty pleasure you don’t have to feel guilty about.”

5. Spencer Jo and the River Ramble: Spencer Jo has been in and out of punk bands since the age of 16, and the winding road has lead him to his current incarnation as a folk artist with a sociopolitical, sometimes surreal, edge that makes his commentary poignant for anyone who listens.

Does your band/group want in on the fun? Click here!