Okay, full disclosure here: I probably don’t qualify as a full metalhead. I’ve listened to my fair share over the years, gone to a few shows, and I can appreciate the artistry. But I know there’s a lot about the genre that I don’t know, so that’s why I was really exciting to see the second annual Calgary Metalfest, coming in June to appease your thirst for thrash and educate the under-informed about the awesomeness of heavy metal.

What is metal, exactly? “I don’t define metal,” says organizer Nate Renaud, “that’s for scientists!” So, if you really want to figure it out for yourself, the Oxford English Dictionary defines the scientific method as “a method… consisting in systematic observation, measurement, and experiment, and the formulation, testing, and modification of hypotheses.”

So, if I theorize that metal is rad, the only way to verify that is to go see for yourself. That’s what I’ll be doing.

Renaud has been planning CMF II “since last year really, but hardcore since December.” And it’s going be be pretty hardcore indeed, as Renaud is not only planning the ‘Fest, but will be playing in it with his band, KYOKTYS.

Renaud is also the Stage/ Production Manager for Noctis Festival, and says that his connections with the metal community from his work as an Audio Engineer have really helped to stock the cupboard for CMF II.

“The lineup has been the only time in my life that I’ve been able to use favoritism,” says Renaud. “If yer my buddy and I’ve worked with ya, yer in! This started and continues to be an outlet for me to showcase talent from around the country and locally that you may have never seen nor heard of. I am an Audio Engineer both live and studio by trade, so I meet alot of musicians. So basically yes, I’m now using bigger headliners to showcase our wicked scene!”

That scene seems to have something for pretty much everyone. If you’re a relative metal rookie like me, Renaud recommends listening to some NinjaSpy. If you’re a youngster, don’t fret, because there will be some all-ages shows, too. The ‘Fest will be split between two venues: Dicken’s Pub is the main stage for the ‘Fest, with the all-ages shows at Broken City (with the exception of the June 7th 18+ show featuring Intronaut). Broken City shows will start earlier (3:45pm) than the adult-only events at Dicken’s (6pm). 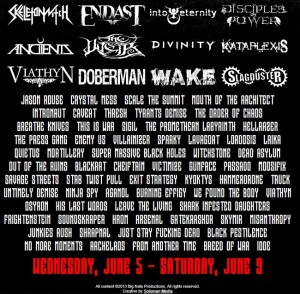 The schedule of shows should be up by the middle of the month, but there is a monster lineup, including a lot of local metal talent.

The ‘Fest is still looking for a few local sponsors to help put on this massive metal event. “Axe Music has come online as a sponsor,” says Renaud, who invites interested parties to contact him by email.

There are other ways to support the ‘Fest, including attending and buying a bit of merch. “There will be CMF shirts, maybe even a few of last years too,” says Renaud. Tickets range from $10-25 in advance. Expect to pay about $5 more at the door, if there are tickets left. Some of these shows are sure to sell out. You can also snag an all-events pass (this includes the 18+ shows, so don’t buy this for the kids) for $75 if you are one of the first 50 people to make the purchase; after that (or after June 1st, whichever comes first), the price goes up to $99.90.

The event runs June 5-9, and is a great chance to listen to some amazing live metal, no matter what type of fan you are. Casual or hard core, metal makes a place for you. So, open your minds and your ears, and prepare to become addicted.

The funniest thing about metal is that most people initially HATE what they hear… then open their minds… and the LOVE of metal sets in.