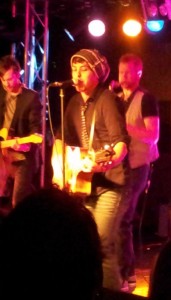 A trio of great Calgary acts showcased some of the great local sound on Saturday night, as Matt Blais released his latest CD, The Heartbeat, to a large and receptive Republik crowd. Coming back home to drop the album, Blais told the audience he was a little apprehensive before the curtain went up.

“Before the show started, I was like a 10 year old who is afraid that no one will come to his birthday party,” said Blais, before he launched into latest single from new album, Running. As good as it sounds on the disc, Blais brought out a very rich and full live rendition, making everything sounding bigger and more fun. Of course, the raucous crowd at his feet might have had something to do with that energy. 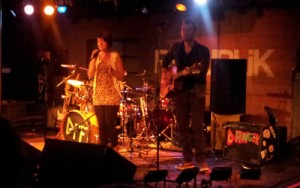 The night started out with PEI native and Calgary resident Trinity Bradshaw, with her accompanying guitar player Carl Janzen. The duet warmed the crowd up with some sweet-sounding covers featuring some amazing diversity, including a quieter version of Lady Gaga’s “Poker Face” and Coolio’s “Gangsta’s Paradise“. The crowd she drew towards the stage was as varied as her songs, and the highlight of her 30 minute set was “Wanna Be Famous”, with interwoven bits of Matchbox 20’s “3am“. The duo really seemed to be in their element, and Janzen’s guitar was the perfect match to Bradshaw’s strong vocals. Trinity has only been in Calgary for two years, but the local audience has definitely accepted her as their own.

Local loudies Dangerfloyd were up next, featuring a set that was very big on bass and fun. With a solid, old-school college rock sound, the band pulled some catchy beats together with good vocals and strong drums to the delight of the already-happy crowd. Following in Trinity Bradshaw’s footprints, Dangerfloyd (Ryan Danger, Kurtis Floyd and Graham “Bluesy G.” Coskey) brought a few covers with them, including a rendition of April Wine’s “Tonight is a Wonderful Time to Fall in Love” that was well adapted to their sound. Starting in 2008, this group calls their sound “gothic Neil Diamond.” Who are we to argue? 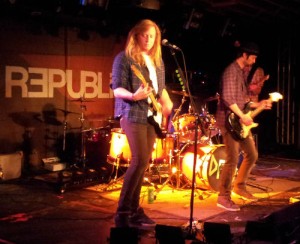 Then, of course, there was Matt Blais, the man of the hour. His high energy set was a definite crowd pleaser, and everyone was up out of their seats for the entire performance. With a voice reminiscent of The Cat Empire (minus the accent), Blais powered through his rock songs, and showed his ability to go in a bluesy direction, with accompanying harmonica, that really brings out the grit in his vocals. Keeping with the theme of the opening acts, Blais brought in a cover of “Are You Gonna Go My Way” by Lenny Kravitz that was thundering, with good horn additions to make it his own. He transitioned smoothly to Stevie Wonder’s “Superstition“, but a version that was slower, harder and very slick. Next, a cover of Franz Ferdinand’s “Take Me Out“, full of the same joy and energy that Blais showed with the rest of the set, highlighting the great new material on the release. Fans eagerly streamed to the merch table, securing their own copy, which came free with paid entrance to the show.

If you missed it, you can chase Matt Blais towards the coast, as his next stops will be in Edson, Revelstoke and Kamloops. Dangerfloyd will be rocking Vern’s on Friday night, and Trinity Bradshaw will be playing Legacy Guitar & Coffee House in Cochrane on Saturday.